Last Tuesday members of the North Shore Labor Council – which is made up of 50 unions that represent approximately 18,000 workers – attended a City Hall hearing in Lynn, where they testified in favor of an ordinance that would keep the city from doing business with companies that have previously violated Massachusetts labor laws.

The proposed ordinance would create a volunteer panel made up of six members known as the Wage Theft Advisory Council. This panel would sign off on companies under consideration for city contracts after thoroughly reviewing a list of companies that have violated state labor laws from Attorney General Maura Healey’s office.

At the hearing Lynn resident and member of Local 939 Painters & Allied Trade union, Kathleen Santora, told the City Council, “Wage theft hurts everyone across the board, to the most vulnerable to higher income wage earners, it is important to pass this ordinance.” Another Lynn resident, Eduardo Perez, who works as a forklift operator stated, “We are here because we need another tool to fight wage theft” going on to state, “Many employers play games with paying wages and everyone needs protection.”

Although the ordinance is still under consideration, Hong Net, City Councilor-at-Large, assured the attendees that the City Council will pass the legislation soon. 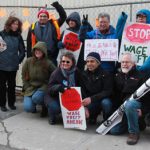