Lynn won’t do business with violators of MA labor laws

Last Tuesday evening the Lynn City Council unanimously passed an ordinance prohibiting contractors who have violated state labor laws from entering into contracts with the city.

Before the meeting in which the law was adopted, a group of protesters gathered, urging the City Council to vote in favor of the ordinance. At the rally, Kathryn Cohen of the North Shore Labor Council stated, “Wage theft hurts all of us, including honest businesses who are underbid and undercut by businesses that cheat the system, concluding “Taxpayers lose as much as $200 million in tax revenue annually. Here in Lynn we are saying enough.”

Following the unanimous vote to pass the law, City Councilor Peter Capano voiced his support of the newly passed law, stating “Someone has to speak up for the workers . . . We’ve put a lot of serious thought into this.”

You can read more about this victory for labor activists here. 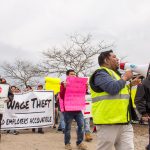