The AG’s settment agreement with SMS stipulates that the agency will pay $95,000 in penalties and restitution for violationg a long list of wage and labor laws, including failure to pay minimum wage and failure to provide employees with earned sick time.

In a statement about the settlement AG Healey said, “This employer was complicit in a scheme to evade state labor laws and rob hundreds of low-income workers of their wages. This misconduct not only cheats workers, it also puts responsible, law-abiding employers at a disadvantage.” 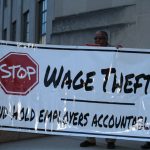 Lynn won’t do business with violators of MA labor lawsBlog