On April 24, elected leaders including Mass. Attorney General Maura Healey joined workers’ advocates at a press conference where advocates urged for swift passage of “An Act to Prevent Wage Theft and Promote Employer Accountability” H1033/S999. Following the State House event, workers and advocates staged a protest against Callahan Construction, whose subcontractors they say have been repeat offenders on wage theft issues.

The measure, which passed the state senate last year by a vote of 38-2, now has been cosponsored by a majority of legislators. Growing support in the House and last year’s Senate passage have advocates optimistic about the bill’s prospects for passage this year.

“This bill has strong bipartisan support because it’s based on the clear and simple value of fairness. Taking legislative action to prevent wage theft will help ensure workers in Massachusetts are paid what they are promised so they can contribute to our economy and feed their families,” said Isabel Gonzales of Community Labor United.

The bipartisan bill with more than 130 co-sponsors would give the attorney general’s office greater authority to protect Massachusetts workers and taxpayers from wage theft. 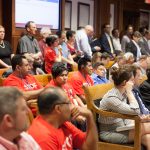