Today The Boston Globe broke a story that a sewing factory in Lowell has agreed to pay $1.2 million in a settlement with federal and state authorities regarding alleged wage violations, further underscoring the need for wage theft legislation in Massachusetts.

(BOSTON GLOBE) A Lowell sewing factory has agreed to pay $1.2 million to settle with state and federal authorities over alleged wage violations affecting 550 workers, including two who were fired in retaliation for cooperating with the investigation.

Under the agreement, UnWrapped Inc. and its owner, Steven Katz, will pay $293,170 for allegedly failing to provide minimum wages and earned sick time to hundreds of low-paid workers, according to Massachusetts Attorney General Maura Healey’s office.

In a related settlement with the US Department of Labor, Katz agreed to pay another $890,021 for allegedly failing to pay 327 of the workers overtime wages as required by federal law, and for at one time having illegally employed an 11-year-old.

The alleged violations took place between April 2014 and April 2016 at a factory where hourly workers primarily sewed reusable cloth grocery bags that were sold to supermarket chains. Many of the workers were employed by staffing agencies, Healey said, but that did not relieve UnWrapped of the duty to ensure they were properly paid.

“This is a company that exploited hundreds of vulnerable workers,’’ Healey said in an interview. “My hope is that this settlement sends a message that all workers need to be paid fairly in Massachusetts.”

According to Healey, he agreed to rehire the two employees who cooperated with the investigation, and to pay them for the hours of work they missed. All back wages and damages are due by March 15. 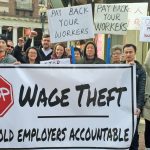 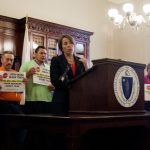