Sugar Heaven is a local candy store chain with business locations in Boston and Somerville, and previously in Dedham. The majority of Sugar Heaven’s employees are minors under the age of 18. The AG’s Fair Labor Division began an investigation after receiving a complaint about child labor and earned sick time violations.

The AG’s investigation revealed that Sugar Heaven and Sapers regularly violated child labor laws by scheduling and allowing minors to work later or for longer than what is permitted and failing to obtain work permits for minors, as required by law. Employees who were under 18 would regularly be responsible for closing the stores late at night.

Sapers also allegedly violated the earned sick time law, which allows for workers to use earned sick time if they (or their child, spouse, parent, or spouse’s parent) are sick or injured or have a routine medical appointment. Employees were not aware of an earned sick time policy at Sugar Heaven and were required to find a replacement worker if she or he called out sick. No one was paid for sick days and if the employee could not find coverage, she or he would have to appear for work.

The investigation also found that Sapers failed to pay overtime to four employees. The state’s overtime law requires employers to pay qualifying employees time and one half their regular rate of pay for all hours worked over 40 in a work week.

Sapers also allegedly failed to pay several workers their final paychecks on a timely basis and required employees to pay for cash register shortages and mistakes that he alleged they were responsible for.

The AG’s Fair Labor Division has cited Sapers for violations in the past, most recently in July 2016 for failing to furnish payroll records. 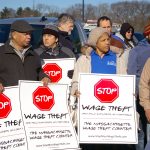